Back to news overview

• During in vitro pseudovirus assays, IPA’s PolyTope® advanced immunotherapeutic TATX-03 prevents infection of cells by SARS-CoV-2 variant-of-concern, Omicron, and all variants of concern tested to date.

• On January 27, 2022, Talem Therapeutic LLC, a wholly owned subsidiary of IPA, filed a non-provisional US patent application and concurrent PCT (Patent Cooperation Treaty) international and other national patent applications, relating to the discovery of PolyTope TATX-03, its in vitro and in vivo effects, and therapeutic use.

VICTORIA, BRITISH COLUMBIA (CANADA), January 31, 2022 – IPA (IMMUNOPRECISE ANTIBODIES LTD.) (the “Company”) (NASDAQ: IPA) (TSXV: IPA) is pleased to announce the release of data demonstrating strong neutralizing potency of its PolyTope® TATX-03 antibody cocktail towards the SARS-CoV-2 Omicron variant (B.1.1.529) in in vitro pseudovirus assays. This first generation four antibody cocktail against SARS-CoV-2 was rationally designed to sustain efficacy against all SARS-CoV-2 strains and variants with the goal of protecting and treating all individuals. The Company believes that it possesses the only first-generation cocktail therapy against SARS-CoV-2 (first publicly announced 2020) that has been demonstrated to retain efficacy against every variant of concern to date through in vitro pseudovirus assays conducted with respect to such variants of concern. PolyTope TATX-03 is unique in its ability to engage multiple modes of action, facilitated through simultaneously targeting various non-overlapping epitopes on the spike trimer.

The Company expects that, upon completion of its ongoing studies, the aforementioned data will enable the Company to file an Investigational New Drug (“IND”) application in accordance with its internal schedule previously announced on November 30, 2021. The approval of the U.S. Food and Drug Administration (FDA) with respect to the IND application will be required prior to commencing any first-in-human clinical studies.

With the ongoing threat of COVID-19 and rising concerns from the frontlines about the effectiveness of existing vaccines and antibody therapies, IPA’s Polytope® antibody cocktail continues to demonstrate promising efficacy during studies conducted by the Company, even when tested against newly emerged variants. New data from IPA reveals remarkable consistency in the ability of PolyTope TATX-03 antibody cocktail to retain its potent and complete in vitro neutralization against all variants, as demonstrated with Omicron pseudovirus reinforced with neutralization data against the wild-type parental virus (Wuhan) and all predominant variants of concern (see Figure 1 below).

The Company’s PolyTope TATX-03 antibody cocktail was developed to target multiple, non-overlapping epitopes on the spike trimer, reducing the risk of mutagenic escape, and facilitating engagement of mechanisms of action that are collectively distinctive from other SARS therapies obtainable to date. 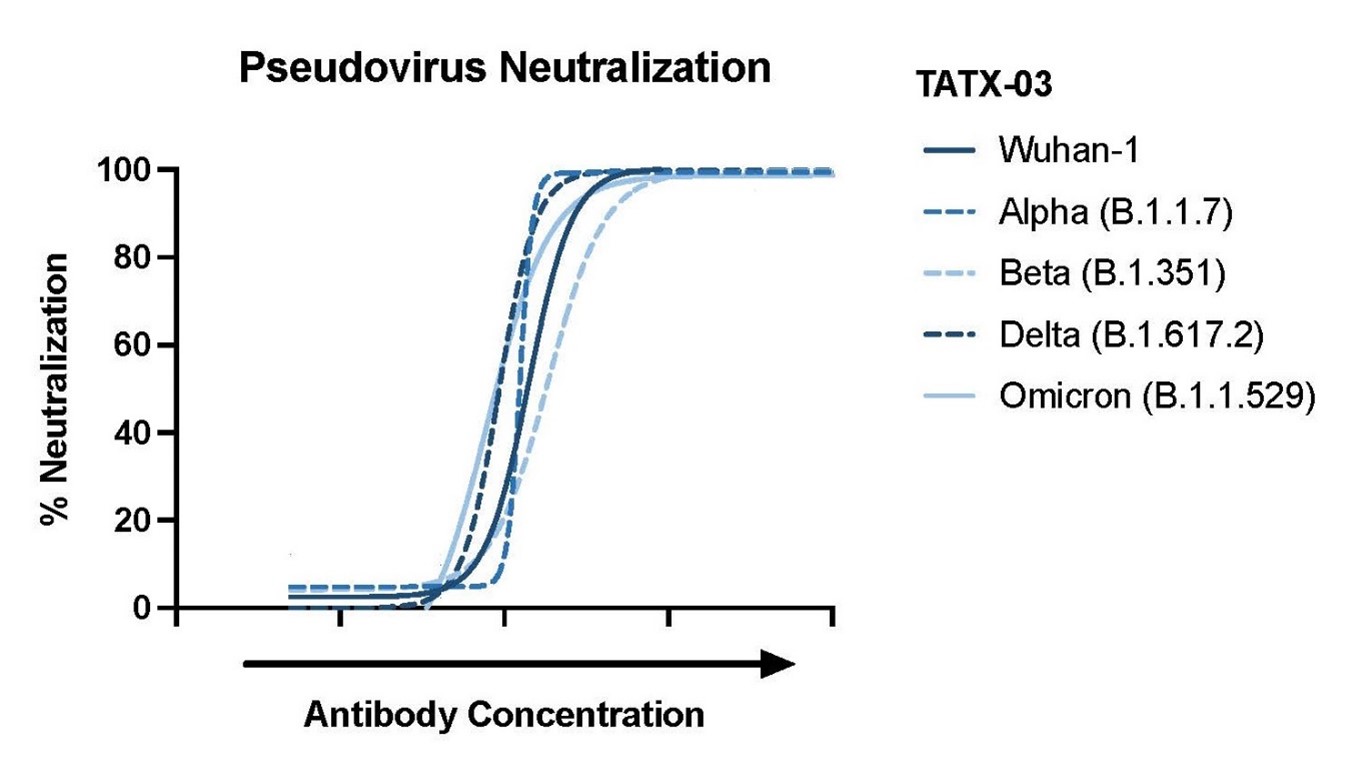 Figure 1. Demonstration of Potent Neutralization Efficacy for IPA’s PolyTope TATX-03 Against Pseudoviruses of Prominent Variants of Concern, Including Omicron.

The previously observed high viral clearance efficacy of TATX-03 in SARS-CoV-2-D614G-challenged hamsters implied a concerted action of the respective antibodies. Apart from anti-viral effects resulting from blocking host cell infection via synergistic effects, the demonstrated ability of TATX-03 to simultaneously bind to four different regions of the spike trimer is anticipated to promote viral clearance by the host’s immune system. Recently obtained in vitro studies support this role of antibody-mediated clearance via activation of the Fcγ-receptors, cell surface receptors involved in antibody-dependent cellular cytotoxicity (ADCC) and phagocytosis (ADCP). As Fc receptor engagement of the fully human antibodies of PolyTope TATX-03 is expected to be even more efficient in humans compared to hamsters, the previously demonstrated potent in vivo efficacy in the hamster SARS-CoV-2 challenge model may even be an underestimation.

On January 27th, 2022, Talem Therapeutics LLC, a wholly owned subsidiary of IPA, filed for patent protection of its PolyTope® TATX-03 antibody cocktail via the PCT (Patent Cooperation Treaty) system (which has 154 member states) as well as national filings in the US, Taiwan, Argentina, and Paraguay, enabling IPA to pursue patent protection of the PolyTope TATX-03 cocktail in all sizeable potential markets. In the meantime, the PolyTope TATX-03 final IND-enabling studies are expected to conclude as scheduled.

At the request of the FDA, IPA has prepared a comprehensive status update demonstrating the performance of PolyTope TATX-03 toward Omicron, and other variants of concern listed in Figure 1, for FDA review. Meanwhile, the Company is also compiling a data package to seek rapid scientific advice from the EMA (European Medicines Agency). Finally, the latest data on Omicron and alternative mechanisms of action of PolyTope TATX-03 has been processed for inclusion in IPA’s updated scientific paper “Cornering an Ever-Evolving Coronavirus: TATX-03, a Fully Human, Synergistic, Multi-Antibody Cocktail Targeting the SARS-CoV-2 Spike Protein with in vivo Efficacy” (https://doi.org/10.1101/2021.07.20.452858) and the Company expects to publish an extended version on bioRxiv in the coming weeks.

“Today’s news is yet another exciting milestone as we continue to validate the significance of generating sustainable and meaningful therapies based on well comprehended scientific principles. It is amazing to consider how far we have come from two years ago, when we clarified why IPA was (and why others should be) concerned about the potential for viral variants to emerge, to today, owning what we believe is the only remaining first generation therapy to have retained strong efficacy against all tested variants of concern”, stated Dr. Jennifer Bath, IPA CEO and President.

“In stark contrast to most companies, large and small, we could replace today’s quote with any PolyTope quote from the past 24 months and it would remain just as relevant. From day one, our scientific team chose a path of rigorous investigation to arrive at a diverse set of functional therapeutic antibodies and we did not sacrifice quality”, continued Dr. Bath, concluding “Our enduring position is clearly supported today as the Omicron variant, with its unusually large number of mutations, cannot escape the efficacy of our well-conceived cocktail”.

ImmunoPrecise Antibodies Ltd. is a biotherapeutic, innovation-powered company that supports its business partners in their quest to discover and develop novel antibodies against a broad range of target classes and diseases. The Company offers a hybrid of services and programs with advanced platforms and technologies — dynamic scientists and business advisors — to optimize antibody discovery and implementation, against rare and/or challenging epitopes. For further information, visit www.ipatherapeutics.com.

Forward Looking Information
This news release contains forward-looking statements within the meaning of applicable United States securities laws and Canadian securities laws. Forward-looking statements are often identified by the use of words such as “potential”, “plans”, “expects” or “does not expect”, “is expected”, “estimates”, “intends”, “anticipates” or “does not anticipate”, or “believes”, or variations of such words and phrases or state that certain actions, events or results “may”, “could”, “would”, “might” or “will” be taken, occur or be achieved. Forward-looking information contained in this news release include, but are not limited to, statements regarding the Company’s ability to complete its pre-IND studies, the ability of the Company to successfully submit an IND application with respect to PolyTope® TATX-03, statements regarding regulatory approvals, statements regarding future publications of scientific papers, statements regarding the potential of IPA’s PolyTope® monoclonal antibodies, including TATX-03, to promote antibody-mediated clearance, to provide strong anti-viral effects against SARS-CoV-2/COVID-19 disease or any variant of the virus as either a prophylactic (preventative) or treatment (therapeutic), to retain efficacy over time, to be more efficient in humans compared to hamsters and to reduce or suppress the emergence of novel variants as well as its potential to prevent the spread of variants. In respect of the forward-looking information contained herein, the Company has provided such statements and information in reliance on certain assumptions that management believed to be reasonable at the time.

Forward-looking information involves known and unknown risks, uncertainties and other factors which may cause the actual results, performance or achievements stated herein to be materially different from any future results, performance or achievements expressed or implied by the forward-looking information. Actual results could differ materially from those currently anticipated due to a number of factors and risks, including, without limitation, the Company may not be successful in timely completing its pre-IND studies or submitting an IND application to the FDA, developing its PolyTope® monoclonal antibodies, including TATX-03, or other vaccines or therapeutics against COVID-19 through the successful and timely completion of preclinical assays, studies and clinical trials, or may not receive all regulatory approvals to commence and then continue clinical trials of its products, including PolyTope® TATX-03 and, be successful in partnering or commercializing its products related to COVID-19, the coverage and applicability of the Company’s intellectual property rights to its PolyTope® antibody cocktails, as well as those risks discussed in the Company’s Annual Information Form dated July 27, 2021 (which may be viewed on the Company’s profile at www.sedar.com) and the Company’s Form 40-F, Amendment No, 1 dated September 28, 2021 (which may be viewed on the Company’s profile at www.sec.gov). Furthermore, there can be no assurance that the pending patent applications will issue as patents and that challenges will not be instituted against the validity or enforceability of such patents. Should one or more of these risks or uncertainties materialize, or should assumptions underlying the forward-looking statements prove incorrect, actual results, performance, or achievements may vary materially from those expressed or implied by the forward-looking statements contained in this news release. Accordingly, readers should not place undue reliance on forward-looking information contained in this news release.

The forward-looking statements contained in this news release are made as of the date of this release and, accordingly, are subject to change after such date. The Company does not assume any obligation to update or revise any forward-looking statements, whether written or oral, that may be made from time to time by us or on our behalf, except as required by applicable law.

By clicking submit below, you agree that IPA may store and process your personal information to send you email updates. You can find further information in our Privacy Policy.